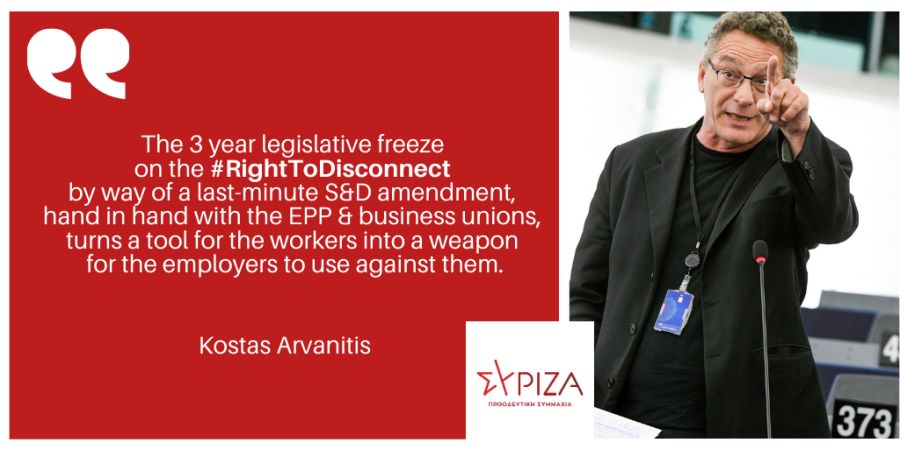 The S&D’s “pro-worker,” “progressive” façade collapsed, in a hard turn for teleworkers, since it evidently succumbed to the pressure by the European Right, employers and business unions, by forwarding a last-minute amendment for a three-year “freeze” on regulating the Right to Disconnect.

The amendment was tabled at the European Parliament Plenary by the rapporteur for the legislative initiative himself, Maltese MEP Alex Agius Saliba, who essentially admitted in a recent interview that this amendment was necessary to reach an agreement, to win the qualified majority vote – meaning to court the vote of EPP MEPS – while also making passing reference to pressure applied from employer unions.

All this is happening while the ILO, in a recent report, is calling attention to the urgent need for legislation on this right. While the EMPL committee voted for Saliba’s original proposal for immediately legislating on the Right to Disconnect, emphasizing that “being able to switch off from work should be a fundamental right, permitting workers to refrain from work-related tasks and electronic communication outside working hours without facing any repercussions.”

This three-year freeze essentially aims to devalue and undo this legislative initiative at its core, since the obstacles that will have taken root in the labour landscape would by then be insurmountable, leaving teleworkers subject to employers’ whims, with no room to try to lift this suffocating status.

Tabling this amendment at the last possible moment just one week before the Plenary, is clear proof of both shady dealings by the S&D, serving as an employer mouthpiece, and the extortive attitude of the neoliberal European Right, attempting to distort the legislative initiative at its core, by rendering it pointless in advance.

It is a dirty game they are playing. We stand firmly against their effort to push for anti-worker amendments framed as “progressive,” to their effort to turn a tool for the workers into a weapon for the employers to use against them.