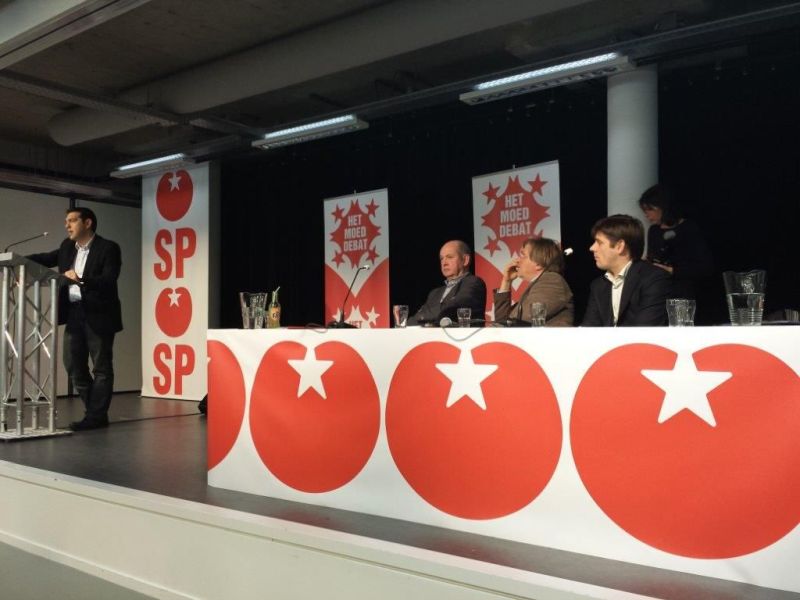 The president of SYRIZA, and candidate of the European Left for the precidency of the European Commission, spoke today in a debate organised by the Dutch Sosialist Party in Amersfoort. Here's the full text of his speech

Your invitation, which I appreciate a lot, came at the right moment. Not because, as you might know, I am candidate of the European Left for the Presidency of the European Commission. But because, yes, indeed! Democracy in Europe is in retreat. And this is the reason, the purpose, and the real meaning of my candidacy: End austerity to regain democracy.

Democracy is in retreat. And the reason is neoliberalism.

1.         It is neoliberal austerity. That causes recession, zero or low and jobless growth. With the Netherlands expected to reach in 2017 the real economic output level of 2008. Austerity brought youth unemployment in the Eurozone to the unprecedented 25%.

2. It is, also, the lack of transparency, lack of legitimacy and lack of accountability and credibility of the European institutions. The European Union is distant from the peoples of Europe in all respects. It has alienated its citizens. That’s why the people react with apathy, distrust and euroscepticism.

That’s how xenophobic extreme right-wing populism rises.You have, in your country, Geert Wilders and his so-called “Party for Freedom”. That’s how neonazism resurfaces. We have in Greece the Golden Dawn party.

The crisis in Europe goes on. The more it lasts the more it destabilizes the process of European integration. The more it threatens the stability of the Eurozone. It has revealed both the inadequacies and the limits of that process.

§    It is an integration centered on financial liberalization. Centered on the monetary union. Enveloped in the replica of the Bundesbank – the European Central Bank.

§    The European establishment has managed the crisis, not in order to resolve it, but in order to rewrite Europe’s postwar political economy. In order to trigger the avalanche of capital against labour.

That's why they don’t tolerate diversity of national institutions. That’s why Chancellor Merkel in Germany, along with the neoliberal bureaucratic elite in Brussels, treats social solidarity and human dignity as economic distortions. And national sovereignty as a nuisance. That’s why they are forcing Europe to wear the straightjacket of austerity, discipline and deregulation.

Our own response is straightforward: End austerity to regain democracy.

We want to end Europe’s current malaise, as Amartya Sen, the Nobel prize-winning economist has described it: the replacement of democratic commitments by financial dictates. We want to reconnect Europe with the Enlightenment and give primacy to democracy. We want to end neoliberalism in order to restore democracy.

Our opponents say: “You can't have both. You can’ t have Democracy and european integration”. We say, that the European Union will either be democratic, or it will not exist.

For us, democracy is non-negotiable. This is our political alternative to neoliberalism and to the neoliberal process of European integration: democracy, more democracy, and even deeper democracy.

Particularly at this point in time, that neoliberalism has transformed an economic crisis into a crisis of European democracy. And this is not a theoretical statement at all. Because we are talking about a crisis that takes very practical forms in real life.

At least in the Memorandum countries, austerity has undermined the institutional authority and the political role of national Parliaments. For example, in Greece, the system of institutional checks and balances has collapsed. The Parliament no longer is a mechanism of democratic control of government authority. It has become an institutional supplement of the government. It only ratifies troika’s decisions.

European democracy is also in retreat because member-states of the European Union – and in particular of the Eurozone – transfer competencies to centralized institutions that have no democratic legitimacy or operational transparency. To institutions whose decisions are German-inspired. Because they reflect the current balance of power in Europe.

So, the rest of us, we transfer national sovereignty and lose democracy.  Because anonymous and unaccountable bureaucrats substitute for elected politicians in decision-making. And those bureaucratic institutions actually operate in a way that is less transparent, less accountable and less open to popular participation than those of most member-states.

Austerity pulls the trigger on the Eurozone, not SYRIZA. Those who say that the Europe we live in cannot change. They say it because they don’t want Europe to change. Because their interests is for today’s Europe not to change. They are, indeed, deeply anti-European. Because they support a European Union that is now giving its peoples austerity, unemployment, poverty, a fall in the standard of living and diminished expectations and prospects for the future.

He came into power as an enemy of austerity, who would give the cold shoulder to Ms Merkel. He is leaving power as a blind neoliberal, a friend of austerity and an applauder of Ms Merkel. With the Greek people suffering an unprecedented humanitarian crisis. With official unemployment in Greece around 30% and youth unemployment more than 60%. And the Greek public debt to GDP ratio to be out of control – having, already reached the level of 176% in 2013.

And I have to remind you at this point that the Greek debt has exploded during the Memorandum years and because of the Memorandum policies of recessionary austerity.

So, what is the reason to applaud for? What is the “success story” to be proud of? What is the political legacy to be remembered of?

The democratic reorganization of the European Union is central in our pre-electoral campaign for the Presidency of the European Commission. As the immediate end of austerity is. We want to extend the scope of public intervention. The scope of citizen engagement and participation in European policymaking and service design.

In this context, at this point, I would like to ask for your support to the up-coming European elections in May. Your support,  not only to my candidacy for the EC presidency, as a personal battle but to the common battle that all the forces of the left, to the collective fight we will give. A fight with a mandate of hope and change in Europe.

We particularly address young men and women. Because for the first time in postwar Europe, a generation of young people expects to be worse-off than their parents. The young see their expectations entrapped into high unemployment and the prospect of low-wage and jobless growth. We have to act not for them but with them! And we have to act now.

We are fighting for a democratic, social and ecological Europe. We are fighting to set in motion the ecological transformation of production and reform the European immigration framework. But, apart from policies, we first need funds to implement them.

So, to regain democracy in Europe, we need a European Union able to finance its own choices. We need a strong European budget managed by the European Parliament.

ü   We support the immediate repeal of the Memoranda and the coordinated reflation of all European economies.

ü   We want a genuine European Central Bank, acting as lender of last resort, not only for banks but also for states.

ü   We believe that Europe needs its own Glass-Steagall Act, in order to separate commercial and investment banking activities and prevent such a dangerous merge of risks into one uncontrolled entity.

ü   We support the collective, credible and definite resolution of the Eurozone debt crisis through a European Debt Conference, predicated on the 1953 London Conference for Germany’s debt.

In place of a Europe that redistributes income to the rich and fear to the poor, we propose our own Europe of solidarity, economic and social security, employment and prosperity.

In Greece, SYRIZA is government in waiting. Our electoral victory would signify a regime-change  for Greece. But at the same time, it will be a political multiplier, in favor of the European anti-austerity movement.  It would create, on its own, the conditions for policy change and a new political balance in the entire European Union.

But I want to make clear, at this point, that, it is one thing to create the conditions for change, and another thing for change to actually happen. Change is possible as never before but it will not come about automatically.

Change will actually happen, only if the peoples of Europe add their own multiplier to the anti-austerity fight of the SYRIZA government. For the balance of forces in Europe to shift, anti-austerity popular mobilization and support across Europe is indispensable.

Because Austerity harms all of you, all of us – and this is what we want to end. This is the reason that we are coming into power. To replace austerity with development. To replace catastrophe with reconstruction. And this is a historic challenge for Europe.

Let me point out that the problem is not the agent of a policy but the policy itself. So, the point is not to dissolve the troika and continue with the troika policies.

The Greek prime minister, Mr Samaras, is preparing a new Memorandum – the third in a row.  Perhaps, with a different name but with the same policies. With new austerity measures. It is, therefore, Mr Samaras himself who sets the actual dilemma of the coming parliamentary elections in Greece: Austerity or development. Memorandum or SYRIZA.

Mr Samaras should have realized by now that political deception succeeds only once. That the Greek people are alert. They remember his pre-electoral promise in 2012 to renegotiate the Memorandum and cancel salary and pension cuts. They remember his post-electoral U-turn as well: The public apology to Ms Merkel for his anti-Memorandum past and his subsequent submission to her policies. Even speaking before the European Parliament last Wednesday. That is, speaking before the most critical to the troika European institution. Mr Samaras remained an advocate of the “success story” of austerity. Once again, he couldn’t rise to the occasion.

Ø   He failed to inform the peoples of Europe that almost 98% of the troika loans to Greece go for the repayment of past loans and bank recapitalization. Not to the Greek people.

Ø   He failed to inform the peoples of Europe that Greece was sacrificed for the European banks.

That, in reality, the Greek people recapitalize European banks, with their unprecedented sacrifices under two successive Memoranda since May 2010.

Ø   He failed to inform the peoples of Europe that Greece is under an unprecedented -for a European country in peacetime- humanitarian crisis.

That a significant part of the Greek society is suffering because of austerity, not having access to any of the basic social services. That more than 25% of the population lives below the poverty line. That six out of ten citizens do not visit their doctor due to their inability to pay. That 3 million people in a population of 11 million, do not have health insurance . That 40% of the population make savings on their food to get their  medicines.

Austerity has proven to be an economic and social catastrophe. A catastrophe for democracy.  Austerity is the crisis itself – it is not a solution to the crisis.

Thank you all for your attention.