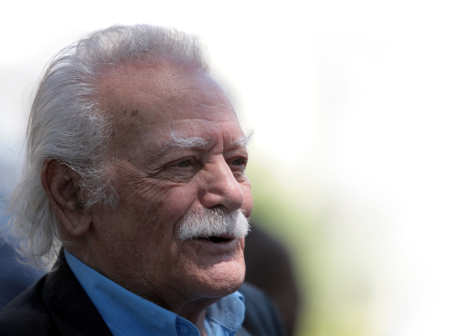 The emblematic figure of the Greek National Resistance against the Nazis, Manolis Glezos, participates in SYRIZA’s European Parliament list of candidates for the forthcoming elections of May 25, 2014.

His was announced on 24 April, 2014 by SYRIZA President, Alexis Tsipras, during a pre-election rally in Crete.

Since May 2012, Manolis Glezos who is internationally well-known, has been a member of the Greek Parliament for SYRIZA. In the last few years he has intensified his struggle for the repayment by Germany to Greece of a loan, which was made during the Nazis occupation of Greece (1941-1944), and for the payment of war reparations to the families of the victims of Nazis atrocities.

This is a major issue in Greece during the last few years that the Greek people have been subjected to the painful consequences of the European and Greek Dept crisis.

In a statement after the announcement of his candidacy, the veteran antifascist fighter said: "Just before I become 92 years old, I had to accept the proposal of Alexis Tsipas and SYRIZA to be a candidate for the European Parliament.  It would be not possible for me not to participate in this major battle in these difficult times".