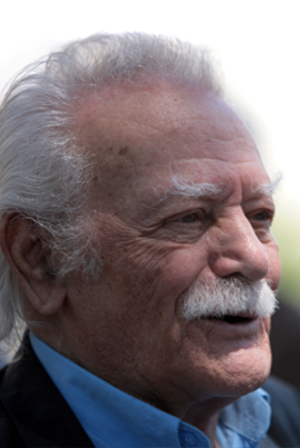 «What we request from the Greek people is to trust us in our quest to create another Europe. We say no to a Europe that protects the market of monopoly, submits to money and doesn’t work as a shield for the weak against the powerful. We envision a Europe, guided by the principles of civil equality, the Europe of People, where we can, together and united, co-decide for our future.», said  Mr. Manolis Glezos, a SYRIZA candidate for the European Parliament,  in an interview he gave to APE-MPE.

In a question, regarding his participation in SYRIZA’s European elections ballots, Mr. Glezos emphasized what he considered as his duty to convey to the European parliament, the claim of the Greek people on the German war reparations. «It is a commitment I have towards my comrades who died in battles or executed during the German occupation. This issue is neither a matter of political diversion nor scheme, as it is implied by some certain agents».

Mr. Glezos stresses that he has prepared «a very thorough plan on the way this claim will be addressed within the European parliament». However, he underlines that «We shouldn’t inculpate the German population for all the crimes that the third Reich committed against humanity in general and Greece in particular. On the contrary, we should be driven by a desire to further develop our friendship with the German people. I believe that the values that the Greek and German civilizations share, could become the foundations for the development of another Europe, the Europe of culture and peace, the Europe of Democracy and civil equality where money is not the ruler who determines the future of humanity».

Μr. Manolis Glezos was born in Naxos on 1922. As a student, on 1935, he co-founded an anti-fascist group with the purpose to overthrow the dictatorship of the 4th of August. On 1941, along with his comrade Apostolos Santas, he climbed Acropolis and tore down the swastika flag, an act that inspired not only the Greeks, but all subjected people to resist against the Nazi occupation. Throughout his life as a political fighter, he has been imprisoned or exiled for more than 16 years, while he has been sentenced to death penalty, three times. In recognition to his multi-faceted action, he has been rewarded by the Academy of Athens, the Global Peace Council while he has also received the Golden “Lenin” award for Peace.

He has worked as a pharmacy clerk in order to finance his studies. He worked as a journalist in several newspapers and served as an editor in four occasions. He was elected Member of the European parliament again in 1984. Since then he has been elected both in a communal and parliamentary level several times.

Apart from his political work, Mr. Glezos has invented a system to prevent floods, combat erosion and preserve underground water that works by the constructions of a series of very small dams that redirect water to aquifers. For his contributions to democracy, to geological sciences and to linguistics, he has been pronounced honorary Doctor of Philosophy of the University of Patras, the Aristotle University of Thessaloniki, the National Technical University of Athens and the National Kapodistrian University of Athens.