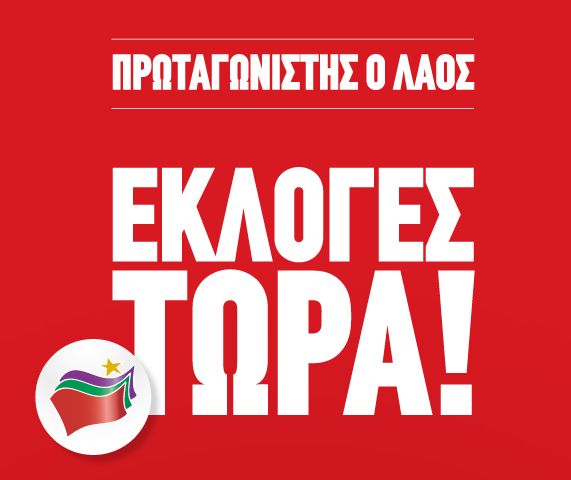 The Samaras-Venizelos government having created with their policy an unprecedented deadlock, are hastening today the parliament vote for a  new President of Democracy, thus annulling what they were claiming until yesterday.

When they had been repeating steadily that the hastened presidential election was a destabilization proposal, they were insisting that the voting is not in any way linked to the political situation in the country and they were absolutely sure about the need for constitutional reform.

However all these claims fell into a void as the society, leading the developments, has delegitimized totally the government. Since last summer a wave of protest against the over taxation on house and building ownership, against the sell-out of public assets, the intensifying authoritarianism and the new barbaric measures that had already been planed, create a suffocating circle around the government.

At the same time the society places an increasing level of trust on Syriza’s proposals, after the presentation of "Thessaloniki program" and the hundreds of public consultation events in the whole country, thus adopting the need for a big change to the advantage of the workers, the unemployed, the farmers and the middle class, the youth and the pensioners.

Quite obviously the minority government did not want, could not and no one would acknowledge to this government any more the right to continue the barbarity and negotiate with the lenders for a solution that will be to the advantage of our country.  So the Troika itself requested that the political framework will be cleared up and the government was forced to annul itself.

The hastened presidential election procedure presents a positive option, however one that we should struggle for and use aiming at the elections and an ultimate ending of austerity and memorandums, opening up a new page for the country.

Although today the 180 MPs required for the presidential election are not available, as a few days before just 155 MPs voted for the new budget, we are aware that they embark on multiple fair and unfair means in order to avoid the Greek people’s judgment.

The only option left to them is the policy of fear and terrorization of the society, the creation of false dilemmas and fake polarization. This option is triggered by the fact that the government as well as the dominant economic and media system and forces inside and outside the country are very well aware that they have a lot to lose.

Nonetheless the people know now and will not be deceived any more from the staged TV reports and the front pages of fear, from the statements of foreign officials who will back their collaborators in our country and from worn out catastrophe scenarios.

Once more the real dilemma is:

either for the ending of austerity and a way out through meeting the social needs or for barbarity and crisis,

either with SYRIZA or with the government of Samaras-Venizelos.

Today is the time for the widest alliance that will give voice to the people and will turn hope into action, the widest building up of the society that will give to SYIZA the parliamentary majority, with decisiveness and optimism and will struggle with the government of the Left for a future of dignity, justice and democracy.

The real dilemma posed again is:

It is either us or them.