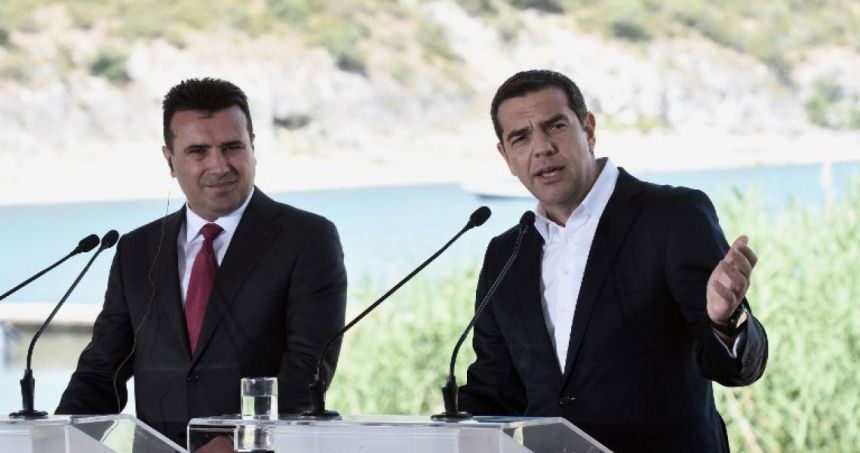 Mr. Nimetz, Special UN Envoy for the settlement of this dispute for the past twenty-five years,

We are meeting here today at Prespes, with the Trinational[1] in the background, for a rendezvous with history.

We are at a point which has been crossed in the course of time by history’s winners and losers.

Persecutors and the persecuted, as it has been narrated through words and images handed over to us by the great poets of human adventure.

We are here to face our own historical responsibility; to address, first and foremost, our peoples and also address all the Balkan peoples.

Peoples that have suffered a lot in the course of history due to the poison of chauvinism and the disunity of nationalist hatred.

Peoples stricken by regional and international conflicts, but also by civil wars and  ethnic cleansing; by border changes; by irredentist falsifications of historical truth; by the imposition and the prevalence of fear.

So, we are standing here today face to face with our peoples’ history.

We are here today in order to fulfill our patriotic duty, both of us.

We are not meeting here today in order to mourn over battles lost in the past.

We are taking a historic step so as to have only winners in the future; so as to heal the wounds of time; to pave the road for peace, consolation, cooperation and co-development, not just for our countries, but for the sake of Balkans and Europe as a whole; so that we step into a new era of regional stability, prosperity and security.

I believe that today’s signature lays the foundations for this new era.

My friend, Zoran, when we met six months ago at snowy Davos, it was very cold, and it wasn’t only cold at the location where we met; the relations of the two countries had been frozen for twenty-five years. Let me remind you that very few believed that we would make it, that we would achieve to leave behind twenty-six years of barren dispute between the two countries.

However, it was due to our shared will that we overcame the difficulties and obstacles.

I wish to extend a special thanks for this huge effort to our two Foreign ministers, because it is thanks to them that we are standing here today.

I’d also like to thank and express my appreciation to the UN in the face of Ms.  DiCarlo and the Special Envoy in particular, Mr. Nimetz, who has insistently fought for twenty- four years for a solution to this issue. Today is an ideal day for the signing of this agreement, since it is his birthday.

I also wish to express my appreciation to our European family, the High Representative, Ms. Mongherini and the Commissioner for Enlargement, Mr. Hahn.

Through struggle and tireless effort, we ended up with a mutually beneficial agreement.

An agreement that fully respects the fundamental principles and values of both parties.

A deal that allows us today to address our peoples, look them in the eye and urge them to read it and support it without prejudice.

If the history of our people is their soul, then this agreement reflects the souls of both peoples; and this makes it a patriotic agreement for both peoples.

In every single article, this agreement defeats bigoted forces in both countries that attempt to exploit the understandable, fully respected sensitivities of our peoples.

These sensitivities were our guide during the negotiations, the drafting and now the signature of this agreement. Of course, from now on they will continue to guide us in our joint effort to make the agreement that we are signing today sustainable;

Because the sustainability of an agreement is not restricted in its legal aspects. It needs join investment, to become rooted in the conscience of our people, so that they realize that this is the definitive solution of a decades-long dispute.

This is why we attach particular importance today to new infrastructure projects, such as the railway connection between Thessaloniki-Skopje-Belgrade-Budapest, as well as to projects that have been agreed upon on the base of the confidence-building measures, such as the new border crossing, a very important project for our region and our cross-border relations.

It is our historical duty -as we are making this shared step- to make sure that this step will not remain suspended.

I am optimistic that we will make it.

I am optimistic that our peoples will become an example of fraternization, in an era of generalized destabilization and geopolitical conflicts; because it is not only our region, but actually the entire humanity that needs examples like ours; examples of peoples and countries that get rid of the burdens of hatred and proceed with building a shared future.

We are faced with huge challenges ahead; geopolitical, economic, social, environmental ones.

The only way to deal with them successfully is a coherent cross-border, regional and international cooperation policy.

Α strategy of extroversion and common European course of the Balkans. This course will decisively do away with the various forces of geopolitical instability and put a definite end to the painful chapter of border change.

Upon ending, let me confide in you that I love Balkan music myself; this wonderful music with the brass instruments that is sung in all languages of the Balkan peoples.

In the immense Balkan music tradition, laments hold an exceptional place; sung by innumerous black-dressed women of our countries, when they bid farewell to their men and children who were sacrificed on the altars of wars; sometimes fighting for universal human freedom and sometimes becoming victims of fanaticism and ethnic conflicts.

Next to those laments there are also joyful songs in the Balkan music history that are praising the birth and the beauty of nature and of our people.

Today, here, in Prespes, we are beginning to write such a new song together; and our aim is this song of joy to be sung for many centuries and by many generations ahead.

By our people and your people.

After all, previous generations in this area have had enough of mourning.

Thus today we are taking this first step towards the future. It’s a brave and historical step, much needed by our peoples.

Thank you very much.