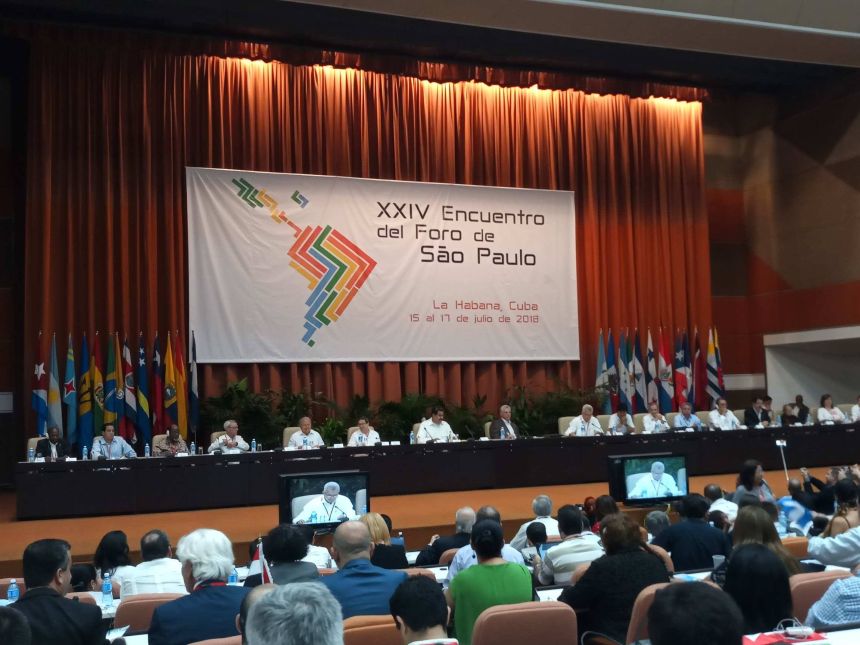 SYRIZA participated at the XXIV Sao Paolo Forum that this year took place in Habana, Cuba.
The closing panel of the Forum was dedicated to the thought of Fidel Castro and the future of the Forum, with keynote speakers the Presidents of Cuba, Miguel Diaz-Canel, of Bolivia, Evo Morales Ayma, of Venezuela, Nicolás Maduro and El Salvador, Salvador Sánchez Cerén.

Former Presidents of Brazil, Dilma Rousseff and Honduras, Manuel Zelaya R., prime ministers and presidents of the island nations of the Carribbean, a number of ministers or former minsters of the progressive governments of Latin America, as well as delegates from 116 political parties from 26 countries of the American continent. The Party of the European Left was represented by 14-member delegation from 9 European countries. SYRIZA represented by Yiannis Bournous, member of its Political Secretariat and Responsible for European and International Affairs.

At the top of the Forum’s agenda was the international campaign for the release of the former president of Brazil, Lula da Silva, the restoration of the democratic normality in Nicaragua, the new prospects for Latin America after the historical win of Andrés Manuel López Obrador at the Mexico elections.
A growing concern is the intention of the new conservative Colombian President Ivan Duque to join NATO, while Colombia has already undermined the progressive regional integration of Latin America.
At the sidelines of the Forum, Y. Bournous had bilateral and multilateral contacts with the Communist Party of Cuba, the Communist Party of Colombia, Chile’s Frente Amplio, the ex President of Honduras Manuel Zelayia, the former Foreign Minister of Ecuador Ricardo Patiño Ec, the President of the Workers’ Party of Brazil Gleisi Hoffmann.

The SYRIZA delegate was speaker at the common seminar of the Sao Paolo Forum and the European Left having as a subject the bridge building between political forces from Europe and Latin America. He described the 3 year government experience of SYRIZA in Greece and the prospects of the country after exiting the austerity programs, the party’s strategy against neoliberalism in Europe, while presenting the proposal of SYRIZA for the further enhancement of the international cooperation between left and progressive forces.