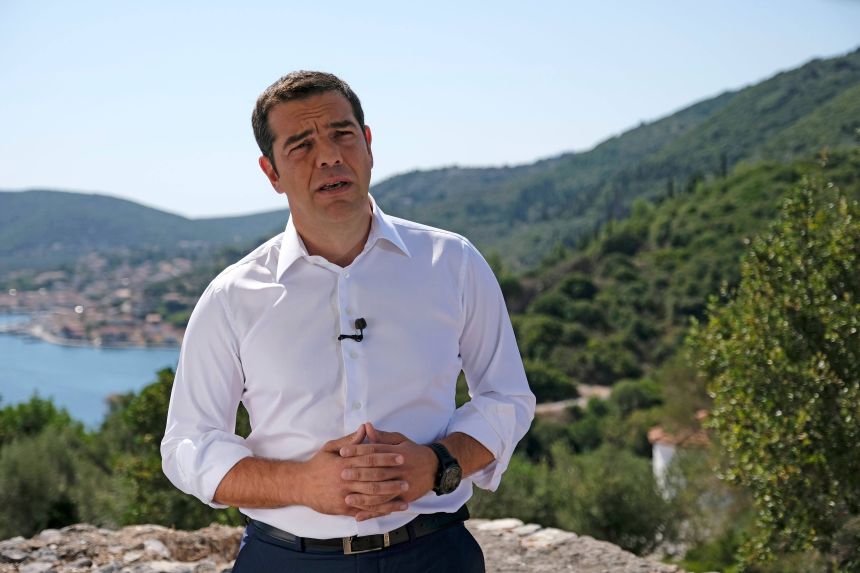 "Today is a new day in our homeland. A historic day. The memoranda of austerity, recession and social desertification have finally come to an end. Our country recovers its right to define its destiny and its future. As a normal European country. Free of coercion or constraints. No more blackmails. No more sacrifices from our people.
"Our country is closed in. The two black Symplegades* close it in", the poet says. We left behind those Symplegades. [*Clashing Rocks]

Aware that Greece is its history. The achievements, the struggles, the sufferings too. All that set out its path through the centuries. A path that has never been easy. But always a path with a purpose. Even in the darkest days, in the worst hardships. Since 2010, Greece has experienced its modern Odyssey. Within five years, unprecedented events have occurred for a country in peacetime. 25% of our national wealth has been lost.
3 out of 10 were left unemployed. 6 in 10 young people, too. Austerity measures of 65 billion were implemented. Violence and repression became a part of everyday life. Democracy has been trivialized. Bankers became prime ministers and ministers became bankers. Fascist gangs came out of their lair after 60 years.
A country in a permanent state of emergency. And a people which never accepted what the powerful had in store for them. And wrote new pages of resistance. Our people took a historic decision, three and a half years ago. To take the helm of the country from those who shipwrecked it. And give it to new captains.
We have assumed this heavy responsibility. With resilience, determination, but also with respect for our people`s sacrifices. We walked with no certainties. Except one. The one mandated by the Greek people: To take the country out of the woods due to the memoranda and endless austerity. We have crossed too many waves to reach our destination today. The crew has been changed. Some feared the waves, others chose to tame them. We heard too many times the Sirens of futility. That the situation in Greece would never change.
And the memoranda will remain here forever. That it makes no sense to resist when faced with Laistrygonians and Cyclops. The beasts which little and weak Greece could never defeat. But none of those bent our efforts. For the people who strove to reach our destination were no longer left behind. They were no longer closed in the hold, without voice, without hope. But they were with us at the helm. And they held on to it tightly, against the face of adversity.

Women and men of Greece,
Today is a day of liberation. But it is also the beginning of a new era and we will not commit hubris and ignore the lessons of the memoranda. We will not surrender ourselves to oblivion. We will not become Lotophagoi [Lotus-Eaters]. We will never forget the causes and individuals that led the country to the memoranda.
The tax-evasion of great wealth, the generalized corruption and vested interests, the impunity of a number of corporate and publishing groups who for years thought they have an entitlement over Greece, the cynicism and contempt of a political elite who thought Greece was their own fiefdom and Greek citizens a submissive mass.
We will never forget those who devastated and devalued Greece and the Greeks because they [Greece and Greeks] did not consent in the implementation of a neoliberal experiment that would last for decades.
But we will also never forget those who stood by the side of Greece and Greek people in difficult times; individuals and political forces from all European countries. They resisted the plans for Grexit and the punishment of our country. Because they know that Greece means much more to Europe than just fiscal numbers.
We will not forget all that we have been through, because what we went through is not just a case study for the historians of the future. Our experience also provides the resources for a country that is writing the new page of its history right now.
We arrived at our destination, we exited the memoranda, but we are not done yet.
New battles are now ahead of us. The "modern suitors" are still here and still confront us. Those who want to see another shipwreck. Those who built Greece in their own image and likeness; that is corruption, vested interests and elite power. Those who want to continue, undisturbed, with tax evasion, survive at the expense of public interest, setting up offshore companies and safeguarding their deposits in accounts outside Greece. Those who consider themselves above the law and the rule of law. Those who are afraid of the idea of an independent judiciary.
We will not leave Ithaca in their hands. Now that we`ve reached our much-desired destination, we have the strength to turn our country into what it deserves to be. The innovative Greek people fought with sacrifice for the end of the memoranda. From today on we start with vision and determination for the new era of our country. With caution and responsibility, to make sure we never return to deficits and bankruptcy. But also with courage towards the rebirth of Greece, for a homeland of equality, democracy and social justice.
Because Ithaca is only the beginning ".