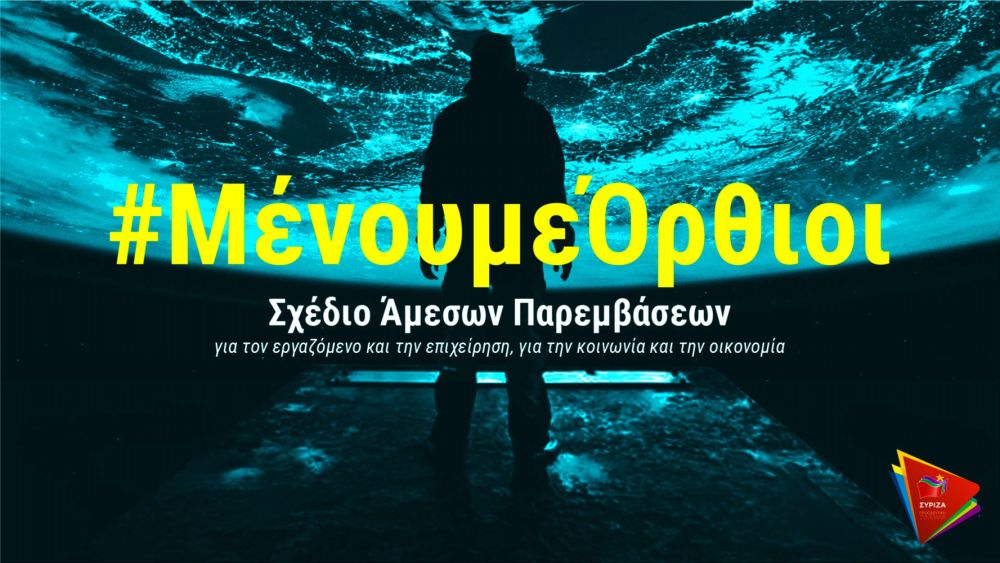 On 6 April, 2020, a press conference was organized, by means of a televised meeting of the President of SYRIZA Alexis Tsipras with the heads of SYRIZA Sectors in Parliament for Labor, Economy and Finance. Alexis Tsipras presented the party’s overall proposal for handling the effects of the coronavirus pandemic on the Greek economy, employment and small and medium-sized businesses. The SYRIZA project is entitled “We Stay Standing”, i.e. not subdue by the pandemic, introduced by Alexis Tsipras as follows:

The central idea of our program “We Stay Standing”, with strong interventions and horizontal measures to be applied for as long as the pandemic lasts, is to support both supply and demand and to create the conditions required for stabilization and recovery.

Our proposal is based on three interconnected cornerstones: The amounts of the interventions, their quality and the time required for their realization.
Regarding the amount: At this moment funds of approximately €20 billion are directly available from the buffer. The buffer consists of €37 billion, of which €16.5 billion is locked away for payments due during the next period of the debt; thus there is €20 billion available directly and approximately that much again is available from European funding. There is a liquidity program of €12 billion accessible to banks from the European Central Bank (ECB). Under present conditions, we deem it advisable to have a generous, front loaded package of measures to support the economy over a period of six months, with a total of €26 billion. Of these amounts, €14 billion must be used directly as fiscal support measures and €12 billion for injections of cash into the real economy, such as loan guarantees. Not included in these measures obviously are the postponements of tax and insurance payments, which the government does in order to increase the size of its package fictitiously. We consider it self-evident that as long as the crisis lasts, together with the program we propose, for at least six months, the taxation and insurance payments of the enterprises affected should be suspended for at least six months.

Regarding quality: The main objective of our proposal is to keep employment at pre-pandemic levels. That is, for the salary of people who are already employed to remain at the pre-pandemic level of February 2020, as well as labor relations as they had evolved before the crisis began. A critical magnitude is for jobs to be preserved in a country that found itself with 28% unemployment which in February was also high, at 17%. Here too our plan is the complete opposite of what the government is doing, which is to submit proposals intended to bring about a profound new restructuring of the labor market to the detriment of the working people. By suspending labor contracts and part-time employment, wages are reduced by some 50%.

Regarding time. “We Stay standing” is a package with the obvious aim of dealing with disturbances of a rare and non-structural situation which, if left to the spontaneous drive of the market and the economy, would produce trends that are extremely difficult to reverse. If interventions are not lopsided but follow the logic of “wait and see” which the government has chosen, the consequences will be dramatic: a prolonged recession owing to the collapse of supply and demand, but also the loss of confidence in the economy. And many more loans will be required than those we propose today in order to prevent these developments, which will rapidly take the form of an avalanche. These multiple expenditures that we will require a few months from today, unless we act quickly, we will be unable to cover with any buffer, because, by then, they will have exceeded the limits of the buffer. And we will be obliged to cover them by borrowing anew. And under the conditions of a global economic crisis, this borrowing will not then be as easy then. And the nightmare of a return to the memoranda will be real again.

The measures we propose today within the framework of the program “We Stay Standing” are as follows:

1. Support for the National Health System with €1 billion additional financing – 4000 permanent jobs for health staff – adequate measures for protecting the people on the front line – central control of labor checks – special care for vulnerable categories of the population.

2. Extending protection of the first home after April 2020 and prohibiting auctions until the end of the year.

3. Immediate measures for social welfare and solidarity of €300 million with a 50% increase in disability payments and Social Solidarity Income (KEA).

4. Special social solidarity allowance in the form of a dividend of €1.5 billion to cover people working in insecure jobs – the known blocks, labor stamps etc. – but also the non-subsidized unemployed, for a total of 1.7 million beneficiaries.

5. Full coverage of salary, insurance contributions and Easter gifts for working people in the private sector until the end of May and subsidization of free professionals and the self-employed with an amount equal to 1/12 of their income last year for each month until the end of May. Level of funding: €8.5 billion.

7. Freezing loan repayments and other bank obligations for as long as the health crisis lasts.

8. Program of non-refundable support of €3 billion for small and medium-sized businesses that have no access to bank loans, with the criteria of turnover and number of employees.

9. Speeding up the outlay of payments for the public investments program.

10. An inspired Hercules plan, i.e. similar to the one being prepared for banks and businesses, which provides guarantees by the Greek state of €12 billion, corresponding to the ECB program, to strengthen their liquidity during the crisis.

Apart from these direct interventions, the Greek state should be prepared to do whatever is necessary to save large companies of strategic significance that may have been endangered during the crisis. The country should not permit either the collapse or aggressive buy-outs of large firms of strategic significance. With this same logic, it must mobilize every available instrument of investment in companies’ share capital, including nationalization if deemed necessary. The public sector should acquire a share in these companies corresponding to its intervention. The public sector cannot today limit itself to being an observer, commentator and simply guarantor of the spontaneous movement of the market and the economy.

We have funds available from the €20 billion buffer, in addition to the €16.5billion for the repayment of loans. There is approximately that much more money available from European funds as well as from the European Central Bank, which is immediate cash in the banks that can be placed in bonds. Thus the total package of immediately available funds, including the ECB cash, is a package of about €50 billion. Our proposal is obviously much less than €50 billion; we are talking about €26.3 billion. But it has a special feature in relation to the corresponding proposals that we see taking place on the European level. It has a very high portion of direct fiscal interventions and many more bond interventions. It is precisely at the level that allows us today the possibility of an intervention by the European Central Bank. This is due to the fact that we can take a similar amount from the buffer, which will not add even one euro to the public debt.