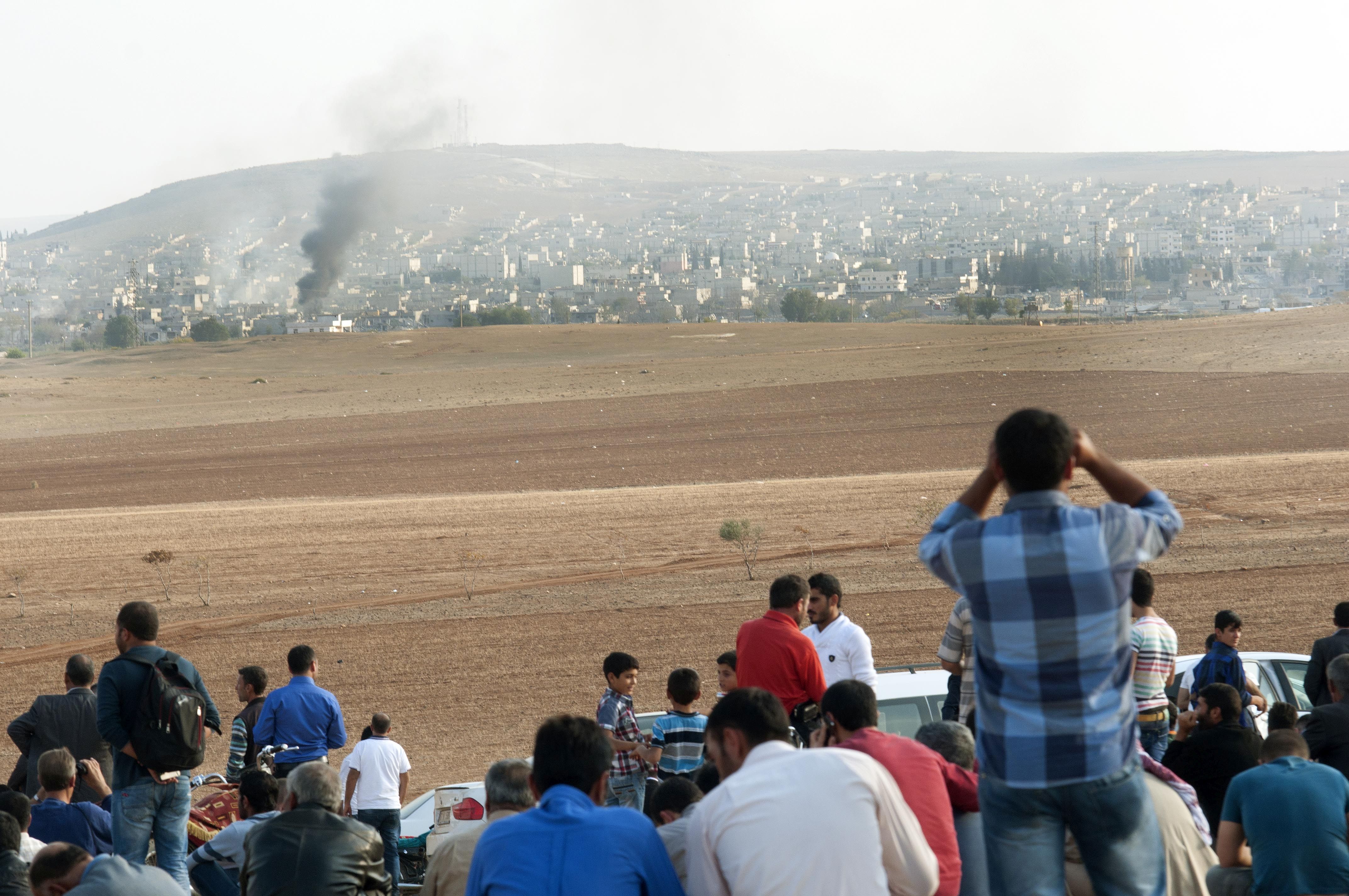 In the framework of the Party of the European Left mission to South-east Turkey which  has been organized by the Turkish parliamentarian parties HDP and ODP, a delegation from SYRIZA with Nadia Valavani, MP and responsible for foreign policy in the parliamentarian group of SYRIZA and Vaggelis Kalbadakis diplomatic advisor of the president of SYRIZA, visited on the 28th-29th.10.2014 Surouts town and the neighboring villages in the Turkish-Syrian border: Just opposite from the free spirit but besieged from jihadists of ISIS, Kurdish town of Kobane, a universal symbol of religious freedom, direct democracy and gender equality. It is not a coincidence that the heroic defense of the city the last 40 days is considered as a “female issue”.

Jihadists’ attack to Kobane resulted in empting the town and the neighboring villages from people. From the 200.000 civilians that passed the boarder to Turkey, half of them remained in the area of Sourouts just opposite of Kobane hoping that the defenders of the city finally will win and they will be able to go back, although this could mean returning to the ruins of their houses. Within 40 days a “town” of 100.00 refugees was added to the population of Souruts and the neighboring villages, creating an explosive situation of humanitarian crisis. SYRIZA’s delegation met with the Governor and with representatives of AFAD (the state civil protection agency) and visited two refugee camps under its command, where 6.700 people live.

The delegation also met with the elected mayor from HDP and the MP of Van area from HDP, as well as with representatives and volunteers in the municipal camp “Arin Mirhan” where 4.000 refugees are accommodated, while Souruts Municipality takes care of tens of thousands of people in camps and houses. The delegates spoke also with the families of the refugee families that are accommodated with families of the area. They also participated in a meeting on the increasing needs ahead of forthcoming winter. The refugees from Kobane have enormous needs in food, medicine, winter clothes and heating devices, while the plastic tents are not suitable for the winter. Particularly vulnerable are the tens of thousands of children of all ages and the elderly. At the same time, apart from the Red Crescent there is no international organizations active in the region.

The delegates of SYRIZA and the members of the other parties in the delegation of the European Left, expressed their support to the Kobane defenders’ struggle and their effort for developing international support to this struggle. It is necessary to allow the vital flow of support to the struggle though Turkey, a county having immense responsibilities for the fate of Kobane.

The European governments need to provide substantial assistance to the refugees of the region, taking in consideration the vital needs for housing suitable for rain and cold weather conditions, for ambulances and for setting up hospitals and schools in the refugee camps. The local activity on the UN agencies and Unicef should be encouraged. SYRIZA’S delegation announced that initiatives for medicine and food and clothes gathering in Greece will be launched soon, although the majority of the Greek people are themselves in deep crisis.

In addition the delegation of SYRIZA emphasized:

-The need from the side of Greece to undertake international initiatives aiming that  the international community will take up the proportional burden regarding the increasing refugee flow from Syria, -1.6 million people are currently in Turkey and part of them will end up in Greece- both in the provision of humanitarian assistance as well as with refugees intake.

- The need to condemn and to isolate internationally the circles in the area which support ISIS.

- The need to find a political solution for ending the catastrophic civil war in Syria.

Kobane should not fall! Kobane must win !