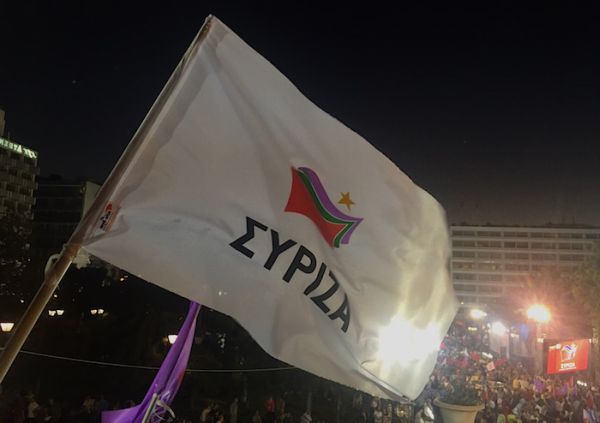 From an electoral alliance to a single Party

SYRIZA (Coalition of Radical Left) entered a new stage in its life and action after its first (Founding) Congress (10-14 July 2013), as a single party.

There were 3,568 Congress delegates, who had been elected by 491 organisations of members in Greece, by Greeks abroad and youth groups. The Congress elected Alexis Tsipras President of the party, as well as a 201-member Central Committee. Some of the component organisations of the initial coalition did not agree with the transformation of SYRIZA into a single party and retain their relationship as allied groups (Active Citizens, led by M Glezos, Democratic Social Movement - DIKKI, DEA, KEDA).

This was the Founding Congress of the new party that declared itself a party of the democratic and radical Left, which has it roots in great independence, anti-fascist, democratic and labor movement struggles in Greece, comprises many different ideological currents and left cultures, while building its identity through a synthesis of the values of the labor movement with those of the ecological, feminist and other new social movements. This is why there are three flags on the SYRIZA logo: red, green and purple.

Since May 2012, when SYRIZA emerged from the elections as the second party (Official Opposition) in the Parliament of the Hellenes, with a percentage of 17%, its evolution has been planned from an alliance into a single party of the modern radical Left, the 21st-century Left.

After that, SYRIZA drafted a government program on the basis of which it fought the elections of 17 June 2012 with the visible possibility of being elected the first party.

However, it has met with fierce reaction from the domestic establishment and European circles, who mounted a fear-mongering campaign against SYRIZA to terrorize the Greek people, in order to stop SYRIZA of becoming the first through parliamentary elections, left government in Greek history.

Despite this campaign, SYRIZA`s election percentage skyrocketed to 27%, with 71 MPs.

Following the June 2012 elections, the party which came first was New Democracy, which formed a government with PASOK and DIMAR. Subsequently (June 2013), DIMAR withdrew from the government after its sudden authoritarian decision to dismantle ERT (the state radio and television); so the pro-Memorandum government continued with ND and PASOK, insisting on and even stepping up the same anti-people neoliberal policies.

Subsequently, SYRIZA`s main goal was to bring down the government and call for general elections, in order to end the modern Greek tragedy that the Greek people are living through, with an unprecedented unemployment rate of almost 30% (among young people the unemployment rate is more than 60%!), with widespread poverty, the over-indebtedness of households, the closing of many small shops and businesses, and a general economic recession that has exceeded 20% in the past five years.

SYRIZA has insisted strongly on its position to abolish the memoranda and renegotiate the debt. At the same time it wants to promote a program to rebuild the country economically and socially, aiming at growth focused on people and respect for nature.

On January 25, 2015 national elections were held in Greece, due to the failure of the then government majority to elect a new president of the Hellenic Republic. The election resulted to a historic victory of SYRIZA, with 36% of the votes and 149 MPs. Six months earlier, at the European Parliament Elections SYRIZA had already become the first party of Greece, electing six members to the European Parliament, instead of one (Euro-Elections 2009).

Following our unprecedented electoral triumph, SYRIZA President Alexis Tsipras was mandated to form the new government which was a coalition government with the Party of Independent Greeks, because we did not have the required 151 MPs (50% plus one). So the government majority numbers 168 MPs. It is important to note that we cooperated for the January elections with the Green Party of Greece belonging to the party of the European Greens. So, 1 of the 149 members of our parliamentary group is a member of the Green Party and the New Environment Minister Mr Nikos Tsironis is also a member that party.

From the first weeks, the Tsipras government went ahead with the implementation of its program introducing new legislation in this direction. The first bill proposed to parliament was to enable the government to deal with the humanitarian crisis in Greece. From the very beginning, the government’s task was to end the extreme austerity policy in Greece and to this end, to negotiate with our EU partners as well as with the European Central Bank and the International Monetary Fund. As expected, negotiations were proven very tough and difficult for the government, given the present balance of social and political forces in Europe and internationally.

Regarding foreign relations, SYRIZA promotes a multidimensional pro-peace policy for Greece, with no involvement in wars or military plans, a policy of independence and friendly peaceful cooperation with all countries, especially our neighbors.

Together with the European Left Party, of which it is a very active member, SYRIZA is fighting for the refunding of Europe with no new divisions or cold-war alliances, such as NATO.

As for the E.U., SYRIZA denounces the dominant extreme neoliberal policies and believes that it must be and can be transformed radically in the direction of a democratic, social, peaceful, ecological and feminist Europe, open to a future of socialism with democracy and freedom. That is why SYRIZA is for cooperation and coordinated action of the left forces and social movements on an all-European scale. In any case, we do not hold euro-centric views and reject a ``fortress Europe``.

SYRIZA draws inspiration from the progressive anti-neoliberal changes in Latin America and promotes close relations with many left forces in that region including with the São Paulo Forum.

At the same time, SYRIZA is in favor of sub-regional cooperation, especially in the Balkans and the Mediterranean. We attach particular significance to confronting the crucial problems of peace in our broader region (Balkans, Mediterranean, and Middle East). We are in favor of peaceful dialogue based on international law and of resolving the problems in Greek-Turkish relations to the benefit of both peoples and peace in our region; We are also in favor of the Cyprus issue being resolved on the basis of relevant UN Resolutions, and that the island be reunited peacefully through a negotiated solution that will establish bi-zonal, bi-communal with a single citizenship, sovereignty, and international personality.